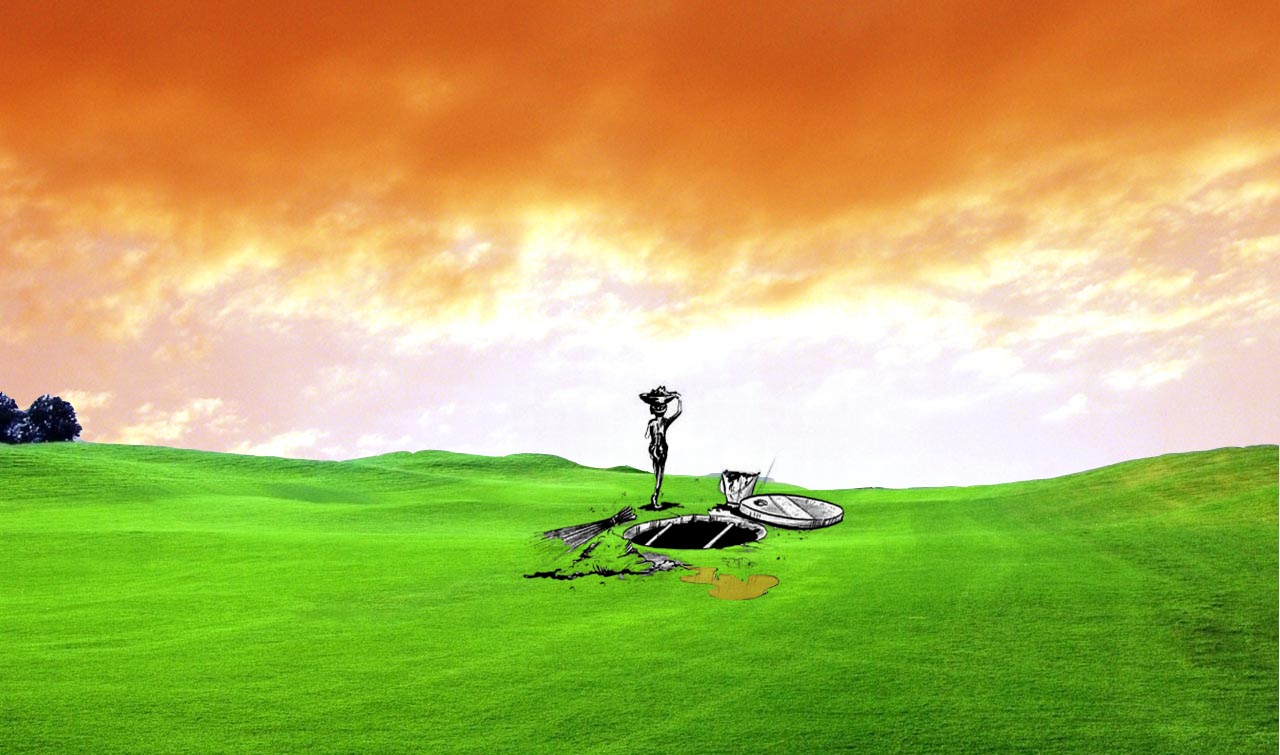 Can shit collection or cleaning of gutters—which has condemned lakhs of people to a life of indignity since ages—be considered a ‘Spiritual Experience’? Definitely not. Everybody would yell. Well, Mr Narendra Modi, the Chief Minister of Gujarat, has a different take on this, which he mentions in the book ‘Karmayog’ (publication year 2007).

The book is basically a collection of his speeches to high-profile IAS officials. Herein he discusses the age-old caste-based vocation of the Valmikis as an “experience in spirituality”. He writes:

“I do not believe that they have been doing this job just to sustain their livelihood. Had this been so, they would not have continued with this type of job generation after gene-ration…. At some point of time, somebody must have got the enlightenment that it is their (Valmikis’) duty to work for the happiness of the entire society and the Gods; that they have to do this job bestowed upon them by Gods; and that this job of cleaning up should continue as an internal spiritual activity for centuries. This should have continued generation after generation. It is impossible to believe that their ancestors did not have the choice of adopting any other work or business.”

Looking at the fact that a section of the Dalits themselves—especially its upwardly mobile and more articulate section—has joined the Hindutva bandwagon, it was expected that there would be no angry reaction to his utterances within the State. A section of the Ambedkarite Dalits and many human rights activists did protest but their voices got drowned in the cacophony of voices of Modi supporters. It is a different matter that when Modi’s remark got published in The Times of India in mid-November 2007, which was later translated in a few Tamil news-papers, it resulted in a massive reaction of Dalits in Tamil Nadu. Not only did they stage protests for calling their menial job a “spiritual experience” but Modi’s effigies were burnt in different parts of the State. Sensing trouble Modi immediately withdrew 5000 copies of the book, but still stuck to his opinion. Two years later, addressing 9000-odd safai karmacharis, he likened the safai karmacharis’ job of cleaning up others’ dirt to that of a temple priest. He told them: “A priest cleans a temple every day before prayers, you also clean the city like a temple. You and the temple priest work alike.”

One was reminded of these ideas of Mr Modi when news came in that the Budget for the coming year passed by the Gujarat State Assembly has allocated a sum of Rs 22.5 lakhs for giving training in karmkand (rituals) to the safai kamdars themselves. The idea is to train them in scriptures so that they can perform puja. It is clear that the ‘new scheme’, as it was presented before the people, was just a revised version of its earlier version wherein members of the Scheduled Castes were given training to become ‘Gurubrahmins’ so that they could also perform pujas. Insiders can also share with you that the said scheme has miserably failed and people who were trained to perform pujas are still searching for jobs.

It could well be asked that if Modi values safai karmacharis so highly, why is it that he has begun outsourcing all the menial jobs for a very low pay, between Rs 3000 and Rs 3500 per month per worker? Why are they not being employed on a permanent basis? A leading Dalit poet raised an altogether different question: “Why didn’t it occur to Modi that the spirituality involved in doing menial jobs hasn’t ever been experienced by the upper castes?”

It is worth emphasising that when the Gujarat Government declared its intention to train safai kamdars in karmkand, supposedly to integrate them into the mainstream of the Hindu society, it also happened to be the period when the anti-Dalit stance of the people in power was very much evident in two clear examples:

the manner in which the State officials tried to cover up the social boycott of Dalits in a village, and the way they tried to save the guilty police officials involved in Dalit killings; both of these had already hit the headlines.

Not very many people would have heard about the village Galsana, Dhanduka tehsil, Ahmedabad district, which is around 100 kms from the city. The Dalits in the village, who are about 500 in number, are not allowed entry into any of the five temples in the village. The younger generation of Dalits protested this ban which resulted in their social boycott. When the news last came in, the boycott was already a few months old. Incidentally when officers from the Social Justice Department visited the village, they did not even acknowledge that Dalits are facing social boycott, forget asking the police to take action against the guilty.

The other news concerned the arrest of guilty police officials involved in the gruesome killings of Dalits at Thangarh. (September 2012) After four months, cop Jadeja and two other accused police officials in the Thangarh Dalit massacre case were arrested on February 23, 2013. It is reported that the killings at Thangarh were the fallout of a minor clash between Dalits and Bharwads over auctioning of stalls at an annual fair organised by the Thangarh municipality. When the Dalits filed a complaint against the Bharwads at the police station, the police refused to take any action; the anger of the Dalits spilled over onto the streets the next day which saw the participation of Dalits in large numbers and the police resorting to strong-arm tactics resulting in the killings. Despite knowing the fact that the infamous police officer had on an earlier occasion also fired upon the Dalits without any provo-cation, the administration tried every trick in its kitty to save him and his colleagues. It was only because of judicial intervention that they were ordered to be arrested.

Galsana and Thangarh can be said to be tip of the iceberg as far as Dalit deprivation and denial of justice is concerned. In fact much has been written about the way the Scheduled Castes and Scheduled Tribes (Atrocities Prevention) Act, 1989 is implemented in the State. One finds that the rate of conviction of cases under the Prevention of Atrocity Act against SCs/STs in Gujarat is a mere 2.5 per cent while the rate of acquittal is 97.5 per cent. A 23-page confidential report submitted by the State Social Justice Department to the State Chief Secretary and Legal Department provides glaring examples of ‘mishandling of cases registered under Prevention of Atrocities Act against SCs/STs’. (The Indian Express, September 15, 2006)

The report provides details of how cases are not investigated properly by the police and the hostile role played by public prosecutors during the time of trials.

In this backdrop it is worth underlining how little Mr Modi knew about this important law and its implications. One could rather say that in Gujarat the Chief Minister is directly responsible for the non-implementation of the Atrocity Act. As Raju Solanki, the famous poet and Dalit rights activist, writes in his blog:

It was on April 16, 2004, that a question was asked to Chief Minister Modi in the Gujarat Legislative Assembly:

“Honourable Chief Minister [Home] may oblige us to tell, is it true that the DSP is responsible for the appointment of an officer not below the rank of DySP as investigating officer in the offences under the Atrocities Act?” The answer of our Chief Minister was shocking. He said: “No, but there is a provision under rule 7 (1) of SC/ST Act, 1995 to appoint officers not above the rank of DySP to inquire into all cases booked under atrocities act. It is not the responsibility of the DSP.”

“The officer not above the rank of DySP” means he may be a PSI or PI and in most of the atrocities cases courts acquit the accused because the investigation officer is either a PSI or PI. Over 150 such judgments collected by the Council for Social Justice revealed that in 95 per cent of the cases, the accused have been acquitted because of negligence on the part of the authorities. In a number of these cases, while the accused has been convicted under the IPC section for murder and attempt to murder, he has gone scot-free on the atrocity charge.

In the end, one would like to put on record the way the presence of Dalits in records is being obliterated without any qualims. During the panchayat elections, Nathu Vadla, a small village of Gujarat with hardly 1000 population, had suddenly hit the headlines. The panchayat election in this village was to have been conducted on the basis of the 2001 data. The village has at least 100 Scheduled Caste people and one seat was to be reserved as per law, but the census data has not been modified since in 2001 the SC population was nil in the village; the election in 2013 was to have been conducted on the basis of the 2001 census. Here also the courts had to intervene to stay the election in the village. The Gujarat High Court stayed the election in the village saying that the electoral exercise in the circumstances would be a ‘mockery of democracy’.