The success of the Amarnath land agitation in Jammu in the summer of 2008 had shown RSS and Co. that their experiment of two-pronged strategy in a modern electronic age pays. Support to the land agitation in Jammu was formed on the foundation of excessive use of local media with television channels blaring out round the clock a one sided discourse, bereft of rationality and communally provocative to the core, as well as years of silently executed spade work done by activists of RSS, Bajrang Dal and Vishwa Hindu Parishad in reaching out to the public with the propaganda. The agitation badly polarized the communities in Jammu region and was used by the BJP to achieve an impressive score card in the following assembly elections.

A similar strategy was at play more dangerously in last year’s Kishtwar riots, followed by the Muzaffarnagar riots, revealing that virulent propaganda had penetrated beyond the cities and towns into the rural landscape, enriching the communal divisions and adding to the vulnerability of the minorities. The media would have gone on an over-drive of painting one-sided picture and completely flawed picture till activist groups visited the area and shed new light on these incidents, forcing a section of media to belatedly make subtle corrections in the narrative of both Kishtwar, where daggers were drawn by both communities, and Muzaffarnagar, where it were primarily the Muslim minorities who were acutely affected – fear and intimidation forcing them to flee their villages, perhaps forever. But the powerful belligerent media was unrepentant, the discourse changing to equating relief for the victims of Muzaffarnagar with Muslim appeasement policies. 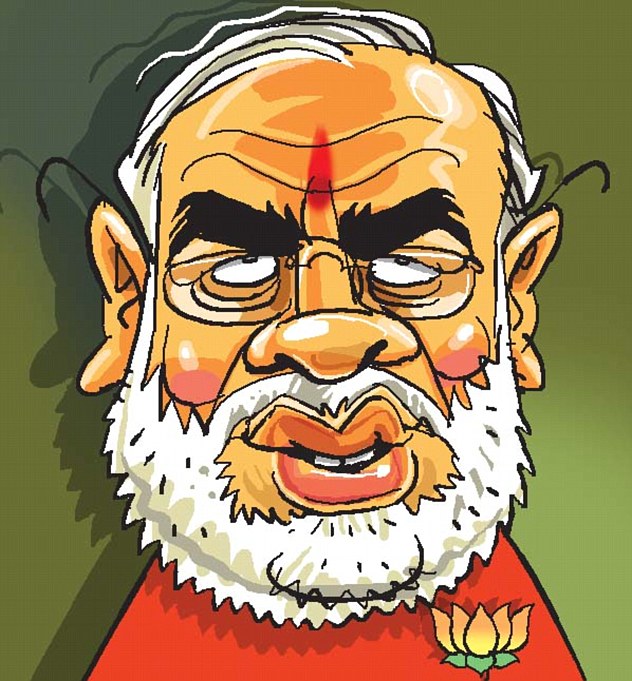 Such an aggression in the tone seems to have a seductive appeal for the masses, bogged down by the multiple crisis of corruption, inflation, economic downslide, poor governance, socio-economic disparities, physical security threats and lack of leadership in terms of vision and commitment. A natural offshoot of the absence of a good leader amidst virtual hopelessness would be that propaganda and lies, propelled by an effectively networked organization or media, begin guiding the course of action with the dominant (socially, politically or economically) taking the lead and the rest taking their place as follower subjects. Long pent up anger and alienation makes the sound of aggression, irrespective of its rationale and content, titillating for the senses. It is this aggression that perfectly fitted into the imagination of first the urban Indian middle-class landscape, later followed by the ‘minions’, when the Anna Hazare led anti-corruption movement began, or much more recently when cashing in on the spirit of that movement, Arvind Kejriwal’s newly launched Aam Aadmi Party became such a raving success. But when leaders are as ignorant as the masses and cannot carry the weight of a concrete ideology or conviction, it leads to be a bigger vacuum, as happened in the AAP rise and fall story.

This vacuum has been so easily capitalised by the far more aggressive tones of the right wing parties backed by RSS, whose history and ideology is no secret. It’s RSS remote controlled prime ministerial candidate Narendra Modi makes no particular claims of being clean, democratic, philanthropic, intellectual or secular, either through his words or actions. His actions speak louder than his words. He remains accused of engineering and patronising 2002 Gujarat pogrom, of encouraging and promoting a culture of fake encounters and of stalking women and some of the cases are still pending against him in the courts. His authoritarian control in the party speaks for his undemocratic credentials and his Gujarat model that has benefited the rich elite, essentially upper caste Hindus, speaks for his capitalist and communal tendency. Sometimes his words also betray it all – whether it is repulsive jargon of kutte ka bacha or the more sophisticated expressions of making a subtler distinction between communities. In a recent interview to a news channel, Modi maintained that he was not communal but only opposed what he called ‘appeasement policy’. “It is our duty to protect the minorities, but when they make mistakes, they will not be spared and will face severest action.” The tone is no different from the manner in which he usually speaks of Godhra, which he is reported to have calculatedly called as perpetrated by “cannibals” and the pogrom as some kind of a retaliatory mistake. He has always made the conscious distinction between the heinousness of the two crimes and while he has demanded action in Godhra, he has only ended up victimizing the whistle blowers and those campaigning for justice in Gujarat riots. The tone continues to be the same – “when minorities will commit mistakes, they will be punished”. Does he mean the persons who make the mistakes or the entire community as was done in Narodya Patya and elsewhere in Gujarat? And while he makes this whole façade of moderation with his benevolence of protecting minorities in the same breath, why does he not talk of ensuring justice if they are individually or collectively wronged? His statements are clear indication of his belligerence against Muslims and a colloquial way of intimidating the minorities that they are safe only as long as they subjugate themselves to the majority (read RSS and the entire Sangh Parivar) or else they would be taught a lesson as happened in 2002.

Truth about Modi is open in front of the public. Whether it is his politics, his personal character or his economic sense, everything is cast in a shadow of his doubtful integrity. But then the other ugly truth is that his adulators are enamoured by the very characteristics he should have been opposed for. And what is being admired isn’t essentially the personality of one man, who is just one little spoke in the larger wheel of the Sangh Parivar. It is the very essence of RSS that is being found appealing, where Modi is only a puppet. If there is a Modi effect in the election, Modi is only the mask; it is the RSS and its Hindutva that is the driving force. And, RSS, a stooge of the British empire, a patroniser of Gandhi’s killing, with an ideology of turning the Indian state into a religious monolith with fascist control and having a gory past of politics of deceit, lies and cowardice, is expected to bail out a country and its teeming millions from this distressing situation. There couldn’t have been a sadder moment in history of independent, democratic India.